MOBILE, Alabama (January 25, 2017) – The Joe Jefferson Players (JJP) Board of Directors recently named Jason McKenzie to serve as Executive Director. McKenzie first became involved with the theater over sixteen years ago in various roles, including performer, board member and advocate for the local theater community. As JJP moves into its 70th season, McKenzie and the JJP Board of Directors have a vision and impressive business plan to lead Alabama’s oldest continually operating community playhouse to serve the community for future generations.

For many years, McKenzie has served as a JJP board member, responsible for all marketing efforts for the theater while also performing in lead roles, most recently as Leo Bloom in ‘The Producers’ and Seymour Krelborn in ‘Little Shop of Horrors.’ “Serving as the Executive Director is going to be my favorite lead role,” said McKenzie. “JJP has been a very big part of my life since the first show I saw as a patron almost seventeen years ago. I am honored and excited to take this wonderful theater to the next level,” said McKenzie.

“The theater is thrilled Jason has accepted this challenge,” said Ryan Northrup, President of Joe Jefferson Players Board of Directors. “During our selection process, there was simply no other candidate who so fully embodied all of the attributes that we need for our playhouse. Jason has already been a tireless volunteer on board, and we are confident his ambition and vision will allow our theater to serve our community for another 70 years.”

JJP has operated in Mobile for 69 years and is committed to providing the community with the highest quality live theatrical experience at a reasonable price. JJP has relied on the generous support of its patrons but, as with most non-profit artistic organizations, has seen a dramatic rise in production costs. As such, JJP’s Board of Directors has repeatedly held off ticket price increases for many years and has instead decided to install an Executive Director. The Executive Director will focus on community outreach; grant writing and building partnerships with local businesses, the City of Mobile and future patrons. “We hired Jason because he is not only passionate about growing our local arts community, but also has the experience to lead us down a path of financial strength. We look forward to writing the next chapter of JJP’s relationship with our community,” said Northrup.

The Joe Jefferson Players performed their first show in 1947. The Joe Jefferson Playhouse is a 305-seat venue located in historic midtown Mobile, Alabama and is the oldest, continually operating community theater in the State of Alabama. Our mission is to bring quality plays, musicals and other performing arts to our community.

Jason McKenzie holds a BA in Speech Communication from Louisiana Tech University and an MBA from Auburn University. Jason has more than 16 years of professional experience in banking, management, client relations and business development. For his contributions, Jason was awarded JJP’s distinctive Harris Award in 2016, in the 2013 class of Mobile Bay Monthly’s 40 Under Forty and received Doug Breau’s 2016 Award of Excellence for his commitment to expanding awareness and support of local performing arts. In 2013, he started a Facebook group for “Mobile Area Theater People” to ensure that theater-minded people in the community can share and connect. 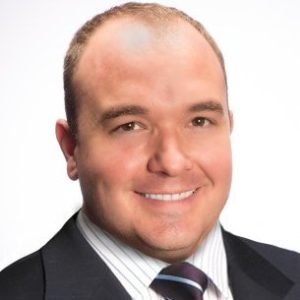 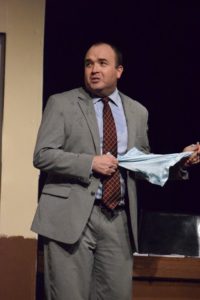 Jason McKenzie as Leo Bloom in 2016’s The Producers.

Over the River and Through the Woods