Matilda is the story of an extraordinary little girl with extraordinary powers. The daughter of abusive parents, Matilda finds refuge in library books, which she reads quickly and in creating her own stories. Things are no better at school, where Matilda also must face a tyrannical and cruel headmistress, Miss Trunchbull, who believes in Crunchem Hall’s motto: “Bambinatum est Magitum,” or “Children are Maggots.” She finds companionship in her teacher, Miss Honey, though well-intentioned, is shy and fragile. Brave little Matilda knows she has to stand up against the adults in her world, and in doing so, discovers her own remarkable powers. Matilda’s bravery teaches Miss Honey and her classmates an important lesson — that even though life can be hard, “nobody but me is gonna change my story” so “sometimes you have to be a little bit naughty.”

Click here to get your tickets to Matilda now! 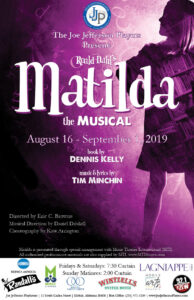 Heroic Macbeth has just won two victorious battles for Scotland, when he encounters three weird sisters who tell him this is only the beginning of his path to glory. They foresee that Macbeth will become the Thane of Cawdor, and then, ultimately, the King of all Scotland. At first, the honest and upright Macbeth ignores the predictions, but when he is bestowed with the first of those two titles, he starts to yearn for the second. Drunk on his own success, Macbeth feels invincible, and–with the encouragement of his ambitious wife–he takes the realization of his predicted fate into his own hands. After murdering his friend and sovereign, King Duncan, Macbeth disappears further down the path toward destruction and despair, even as he is tortured by questions of conscience. He has always been a masterful warrior, but applying the rules of war to life at home becomes much more complex. Shakespeare’s Macbeth reveals to us the danger of ambition, crafting a terrifying parable in which great people are destroyed by the power of their own success.

Benjamin Braddock is a confused young man. Having spent four years achieving a brilliant scholastic record, upon graduation he finds himself adrift, uncertain about his future, disconnected from his purpose, and increasingly alienated from the upper-class, suburban, “plastic” world of his parents. Fighting panic and boredom, he is deeply conflicted but ultimately willing when Mrs. Robinson, the unhappily married, alcoholic, and dangerously charismatic wife of his father’s business partner, tempts him into an affair. Benjamin’s tenuous existence of lazy days and stolen nights falls apart when he falls in love — with Elaine, Mrs. Robinson’s upbeat, optimistic daughter. Terry Johnson’s stage adaptation of The Graduate, based on the novel and the iconic 1967 film, is a bitterly hilarious dark comedy, full of rapid fire dialogue between fascinating and horrifying characters. This play explores family dysfunction, parental expectations, crumbling marriages, and the naive, yet disillusioned, dichotomy of youth, against the shiny backdrop of affluent Southern California in the 1960s.

Click here to get tickets to The Graduate now!

Deloris Van Cartier is an aspiring singer in Philadelphia, where she is auditioning to perform at her gangster boyfriends nightclub. Deloris believes that Curtis is going to introduce her to a big producer, but is upset when he tells her she is not ready. Hurt and rejected, Deloris decides to break up with him, but when she goes to find him she accidentally sees him kill one of his cronies. Deloris runs to the police, who place her in hiding at a convent until Curtis is brought to trial. At first, Deloris feels as though it will be the worst thing in the world, chafing against the constraints of convent life and an immovable Reverend Mother, but once she is introduced to the struggling choir at the convent, everything changes. She finds that many of the nuns at the convent are not that different from her, and that they are quite fun to be around. They help give her a bigger purpose in her life, showing her a genuine love and affection that was missing prior to her arrival at the convent. Sister Act is a joyous show that uses music to bring different communities, and lifestyles, together.

Click here to get tickets to Sister Act now! 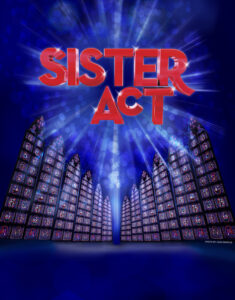 Auditions: March 22nd & 23rd @ 6:30PM
Not long ago, at a cabin lost in the woods in Michigan, a group of five college students found themselves face to face with evil forces summoned by the Necronomicon. One by one, they were captured by the demonic forces in the woods and turned on the others, until all that was left was Ash, a loyal S-Mart employee. Armed with his boomstick (a shotgun) and his chainsaw for a hand, Ash is charged with destroying the demons and saving the world. A musical filled with the iconic images and lines from the original Evil Dead movie franchise–not to mention gratuitous violence and gallons of fake blood–Evil Dead: The Musical is a cult classic romp of pop culture against evil spirits bent on destroying the world, destined to leave audiences cheering.

Click here to get tickets to Evil Dead now! 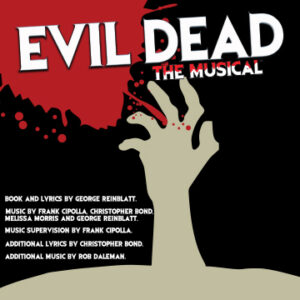